Even though the Philippines enjoys a tropical climate all year long, there’s still something special about summer. It’s been years since I’ve enjoyed the mandatory two-month break from school for the season so you’d think I’m used to it by now, but for me, summer’s never really complete without a trip to the beach.

That said, with the past few months being extremely stressful with work and family obligations, I panicked when I realized June was upon us and I still haven’t gotten a dose of Vitamin Sea. With my brother being overwhelmingly tired about everything we’ve had to deal with and bemoaning the fact that he hasn’t had a proper vacation, I decided to hit two birds with one stone and planned an intimate beach outing to cap off the summer. 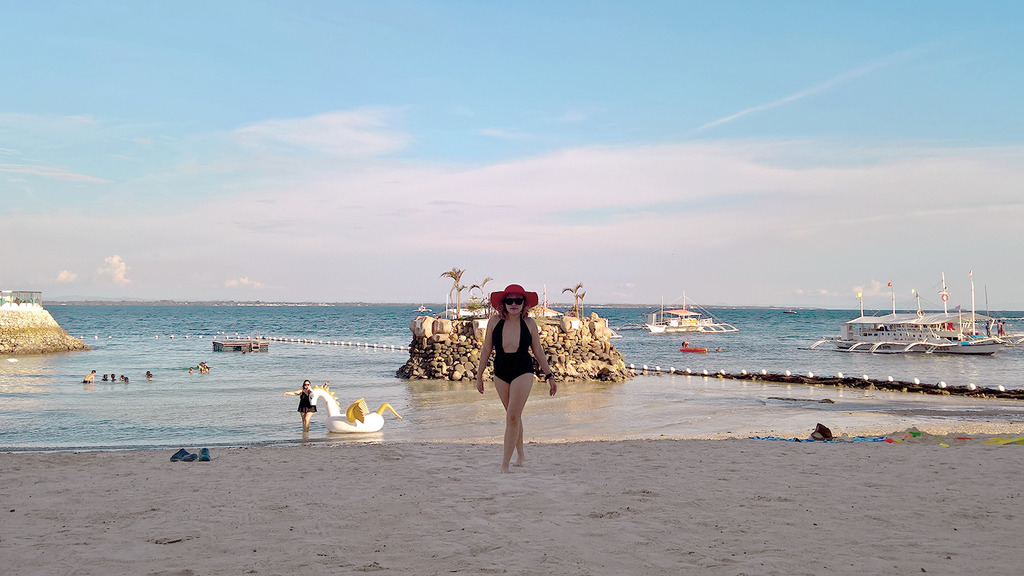 After Mum vetoed the original idea of an island hopping, I switched tactics and booked a stay for us and our friends at the Mövenpick Hotel Mactan Island Cebu, a.k.a. one of my favorite places. It’s a perfect place for a staycation, as it’s far enough from the city but it’s just a 30-minute drive away, and the beach is gorgeous. I’m no stranger to the resort, having been there several times over the years, but it was always somehow work-related and I never got chances to enjoy it with my brother. Until now.

The weather had been volatile in the past few weeks, thunderstorms signaling the start of the rainy season. Thankfully, we were blessed with clear skies and the sun on that particular weekend, but the mid-afternoon check-in time meant the tide was low by the time we were ready to hit the beach. One of the things I like about Mövenpick, though, is that the beach doesn’t really go crazy shallow even during the peak of the low tide, so we were still able to swim in deep waters when we ventured further out.

We only had an hour or so of daylight to go by, and we weren’t particularly in the mood for the pool, so that meant a lot of time to enjoy our rooms. The two-bedroom suites are decorated in a more old-fashioned manner compared to some of the newly renovated rooms, but certainly no complaints. We felt baller enough because everything was so fanceh.

No stay at the Mövenpick Hotel Mactan Island Cebu is complete without having the 15-course Churrasco Buffet at the Ibiza Beach Club. It’s odd to talk about this part without photo support because everyone was too busy stuffing themselves silly, but Churrasco is a Balearic-inspired dining concept that involves waiters going around the tables serving you meat and seafood fresh off the grill. Yep, that’s 15 courses of chicken, pork, beef, fish, salmon, squid, shrimp, ostrich and lamb, plus salad and dessert. And wine, always wine.

Pro tip: Don’t bother with the salad and just reserve all the space in your tummy for the main courses. Trust me on this. Also, fun fact: I know they used to do the Churrasco Buffet with chips – red on one side, meaning you’d like to pass that course; and green if you’d like some of what’s being offered. Cool concept, but I suppose in practice it’s just easier to tell the waiter straight up what you want.

Sunday was beach day. After a leisurely breakfast at the resort’s all-day dining restaurant Sails, we drag ourselves to the beach. We caught the peak of the high tide this time around, which was insane as we found ourselves in neck-deep water just three steps from the shore. The water was cool and refreshing, and it was a treat to see schools of fish zipping around everyone. As Charlene told me while we were wading around, it’s the first time she’s been in touch with nature in a long time.

Our vacation was way too short, but spending a relaxing weekend with good company at the beach was all that we needed to recharge.

And in case you were wondering where my brother has been all along… yeah, he was too busy doing his own thing with his friends, going from the beach to the pool to… err, playing pool, but they had fun too. 😛

(Special thanks to Meg Sta. Ines-Hernandez of Mövenpick Hotel Mactan Island Cebu for making sure everything was smooth sailing during our stay!)