Warning: Major floof and cuteness ahead

As 1,197 people on Facebook and 1,260 people on Instagram know, I have a new man in my life. His Royal Floofiness, Gryffin the Chow, is an adorable red-coated chow chow who looks like a little lion, resembling the emblematic animal of the great House of Gryffindor he was named after. His appearance also makes him look like half of a griffin, the majestic part-lion part-eagle creature in mythology.

Despite how cute they look, most people are wary of owning chow chows because they tend to be aggressive—loyal to their masters, yet mean to strangers. They can also get quite aloof, which is the total opposite of most dogs who are people-pleasers. As someone who was debating getting a cat, I can’t say I mind the haughty nature; I was, however, concerned about the hostility.

I read that, in order to tame down the aggression, chows should be socialized early on. Get them used to unfamiliar people while young, and they’ll be friendly doggos. With that, I’ve taken to bringing Gryffin with me on playdates and letting him meet my friends and their dogs.

Cebu isn’t really a park city, and the few parks we do have tend to attract a lot of stray dogs. Not to discriminate against all of them, but I’m concerned about safety. I’m wary of having to break up a dog fight if it comes to that, and most of these stray dogs haven’t had their shots.

So, Gryffin and I have been on the hunt for pet-friendly places in the city, and we’ve found enough to warrant a list!

As a general rule of thumb, most restaurants and cafés with al fresco seating usually allow pets outside the establishment, so they’re fair game enough to be excluded from the list. This will focus on places that will actually let your furry loved ones in and enjoy the facilities.

It’s always been a goal of mine to bring Gryffin to the beach, see if he takes to the water as much as I love it. The closest he’s ever been was on a boat when we went island hopping with the entire family, but since he just had his shots then, he wasn’t allowed to go swimming.

That said, I’ve been looking for pet-friendly accommodations every now and then, in an attempt to turn this ambition into reality. The thing is, not a lot of hotels and resorts allow pets to maintain safety and cleanliness standards. It was a thrill to discover that Anika Island Resort in Bantayan Island welcomes furbabies, as long as you clean up after them. Howl the Chow, who recently made Who’s Your Pupper, Senpai? headlines for his extreme makeover, was able to laze away by the sea with his forever family.

It took me a while to remember that Banilad Town Centre is actually pet-friendly. My first visit there with Gryffin was when I had dinner in Royal Krua Thai, and I just made sure to take an outside table to accommodate him. The next time we were back, it was to rush him to Cebu Veterinary Doctors because he was lethargic and running a fever, and it was the nearest clinic to where we were at the moment.

One week later, we were back for a check-up, and a much-better Gryffin was finally able to enjoy most of the facilities. Most notably, Bo’s Coffee was very welcoming and let him stay inside while we had our frappuccinos, as long as we take him out when he gets noisy.

The Cebu Yacht Club is mostly outdoors, so it’s hard for the place to not be pet-friendly. There’s a wide stretch of grass right before you go down to the harbor, making it the perfect place for your dogs to run around while you daydream about sailing off into the sunset aboard one of these yachts.

Establishments within the Cebu Yacht Club are also mainly al fresco, so both hooman and doggo can enjoy a quick escape to Mactan Island on weekends.

Gryffin’s mummy loves her caffeine, so it’s always a pleasure to discover cafés that are pet-friendly. A homegrown coffee shop in midtown Cebu, Coffee Prince takes pride on having various types of events, including a dog’s birthday party that Gryffin was invited to last year. Unfortunately, he wasn’t able to make it, but it was good to know that they’re welcoming in that aspect.

One of the newest commercial complexes in Cebu, The Greenery is home to a 24-hour coffee shop (yay for Tom N Toms!), a yoga studio, salons, clinics, and several restaurants. Its biggest selling point for Gryffin is the huge open area at the back of the building, where he can run around on the grass.

The restaurants and cafés there individually have their own rules for letting pets in. Most notably, Weekend and Ilaputi are pet-accommodating (as well as Ilaputi in Axis Entertainment Center, Escario). Their outdoor areas within The Greenery easily make up for the other places who may be stricter with their rules.

Recently, The Greenery also started Bark in the Park, a gathering of dog-lovers and their pets every first Sunday of the month. It’s the closest to a dog park we’ll ever get in Cebu for now. 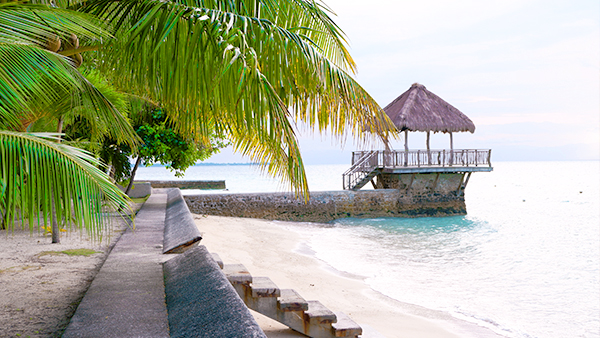 When an establishment is owned by a dog, it’s kind of hard not to be pet-friendly. Such is the case with Les Maisons d’Itac, a boutique beach resort tucked into one of Ronda’s fishing communities. Literally ‘the house of Itac’, the man of the hour is Itac, A Very Good Boy who keeps things in the resort running alongside sister Stacy.

A chat with the hooman General Manager of Les Maisons confirms that, yes, guests are allowed to bring pets as long as they clean up after them. Both Itac and Stacy go potty in designated areas, so it’ll be fairly easy to tell who’s had an accident. No puppy dog eyes will work here.

When it comes to good coffee, no drive is too far away. Gryffin embarked on his first ever road trip and hightailed to the City of Carcar, two hours south of Cebu, to visit Lokal Brew. This café, which opened recently, is the perfect stopover for travelers who need to stretch their legs for a while, and get a caffeine fix before going back on the road.

The Lokal Brew staff are very accommodating to pets, even giving Gryffin a tub of cold water so he won’t get too thirsty. For the hoomans, a must-try is the Kabkad Latte, which is concocted out of beans from Linear Coffee Roasters.

This list wouldn’t be complete without the mention of Parkmall, Cebu’s de facto pet-friendly mall. Besides pets being able to get in and roam all over, the mall hosts several pet-centered activities such as fashion shows, fairs, competitions, and the like. It was home to the Pet Festival Philippines, which is the biggest gathering of pets and pet lovers from all over the country.

Parkmall requires a Pet Pass ID, which you can apply for at the concierge. Don’t forget to bring your pet’s vaccination booklet updated with all his or her shots.

A mall that’s much closer to the city! It’s definitely Gryffin’s favorite mall, for sure. He just loves the cool marble tiles on his paws, and even decided to invite some people over for his barkday pawty when he turned one earlier this year.

Robinsons Galleria Cebu issues pet passes for when you visit with your pet, but to make things easier, enroll your doggo to the Happy Pets Club instead so you don’t have to do this every time. Enter by the door near The Coffee Bean and Tea Leaf, fill up an application form at the concierge, and show your dog or cat’s updated vaccination records. Don’t forget to bring two copies of a 1×1 photo (of your dog, not you). Dogs must be in diapers, or carried, or brought around in a stroller. There are also height and weight limitations, so owners of large-breed dogs, take note.

We’ve always known pets were allowed in SM Malls, but since they didn’t really advertise it, we held off going. Recently, however, they’ve been more active in promoting their pet-friendliness, hence they’ve made the list. Their guidelines are even more relaxed than Parkmall’s and Galleria’s, especially in that diapers aren’t necessary. Just clean up after your pets!

Gryffin is keen on the chance to finally go to SM Seaside City Cebu one of these days. It’s the mall that’s closest to home, and there are a lot of places to explore.

Cebu’s favorite food market at the Cebu I.T. Park is a popular destination on weekends. It showcases a lot of homegrown food establishments, some already well known and most up and coming. You can eat whatever you wind up getting at any of the numerous picnic tables scattered throughout the place.

This weekend food market is Gryffin’s favorite place so far, because he gets a lot of girls #GryffinGotGame. People watching is his favorite past time, and this place allows him to do just that.

While it’s somewhat understandable why high end hotels and resorts don’t allow pets, we have to give it to them when they make concessions for our furry friends.

In April, Marco Polo Plaza Cebu held its annual Run for ERUF, a fun run for the benefit of the Emergency Rescue Unit Foundation and a celebration of the hotel’s anniversary. This year, they changed things up a little and made the run pet-friendly! Gryffin took part in the 1K category, and was able to hang out at the hotel’s grounds for one morning. It was a fun effort appreciated by pets and pet-lovers alike, and here’s hoping they continue being pet-inclusive in some events, one way or another.

What are other pet-friendly places in Cebu that we missed? Let us know in the comments, and maybe we’ll see you and your doggos around?

All photos, unless otherwise stated, have been retrieved from the Facebook pages of these places. Also, thanks to Gryffin’s Uncle Antonio Java of Rider’s Block for taking all his photos! <3

Lumia 950 XL: How I ended my relationship with iPhones (but had an affair with them anyway, because Pokémon GO)
August 20, 2016

Hello, Does Anyone Still Write These Days?
September 2, 2020

18 thoughts on “Pet-Friendly Places in Cebu”